If only I could convey with words the smell of piñon smoke, sound of geese flying overhead, and cold kiss of snowflakes on cheeks.  The softness of wet earth under muddy boots and bright, red willows. Winter in Northern New Mexico.

As I watched and listened to the news over the past 24 hours, I was reminded of a photo I saw years ago, titled “Pale Blue Dot.” Barely decipherable, within a brown band on the right side of the photo, is a pale, blue dot; small enough to be mistaken for a speck of dust on the photo or computer screen.

According to Wikipedia, “The Pale Blue Dot is a photograph of planet Earth taken in 1990 by the Voyager 1 space probe from a record distance of about 6 billion kilometers (3.7 billion miles, 40 AU) from Earth, as part of the solar system Family Portrait series of images. In the photograph, Earth is shown as a fraction of a pixel (0.12 pixel in size) against the vastness of space. The Voyager 1 spacecraft, which had completed its primary mission and was leaving the Solar System, was commanded by NASA to turn its camera around and to take a photograph of Earth across a great expanse of space, at the request of Carl Sagan.
Subsequently, the title of the photograph was used by Sagan as the main title of his 1994 book, Pale Blue Dot: A Vision of the Human Future in Space.”

As I listened to one newscast after another relay stories of unimaginable human suffering, from wars between Gaza and Israel, Ukraine and Russia, angry white Americans and immigrants fleeing gang violence, plane crashes in the midst of a war zone, and a world renowned AIDS researcher dying in said plane crash, each story was worse than the last. And those were just the stories deemed important enough to make it into the 30 or 60 minute program. Iraq, Syria, and numerous others weren’t even mentioned.

All 7.046 billion of us, living on that speck. Telling jokes, making livings, eating, farting, falling in love, having children, getting sick, laughing, crying, cooking, migrating, evolving, believing, dying, traveling, kissing, observing, reading, learning, speaking, arguing, growing, and killing each other. All governed by gravity, time, the weather, fate, the desire to love, be loved, to be happy, healthy, and safe. And yet, somehow, it is our differences, rather than these similarities, that so many dwell on.

Not knowing what else to do, I would just like to Thank Carl Sagan for showing us that photo. I want to post it everywhere; online, billboards on the Sunset Strip, the cover of the NY Times, and as the background for every newscaster’s desk. 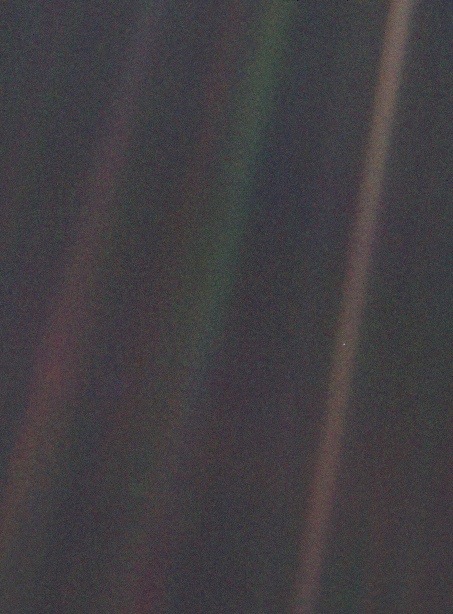